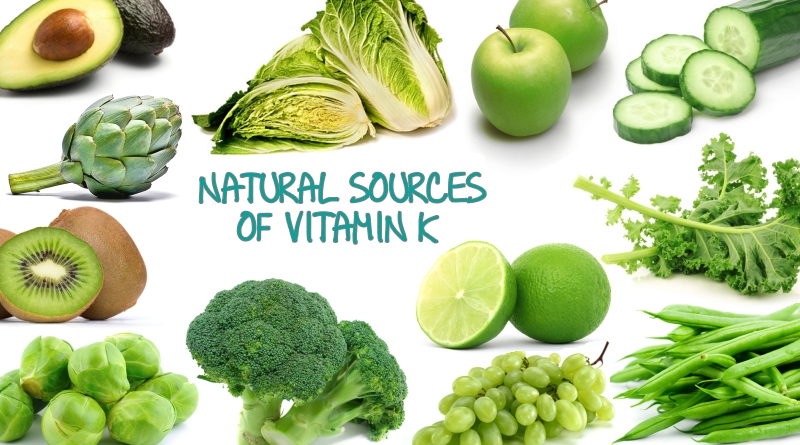 Vitamin K is an umbrella term encompassing a group of chemically related fat-soluble compounds known as naphthoquinones. This group includes vitamins K, K1, K2, and K3. Vitamin K1 (phytonadione) is the natural form of vitamin K; it is found in plants and is the primary source of vitamin K that humans obtain through foods.

While rare, a deficiency in vitamin K can lead to defective blood clotting, increased bleeding and osteoporosis. Symptoms include easy bruising, gastrointestinal bleeding, excessive menstrual bleeding and blood in the urine. Those most at risk for a vitamin K deficiency include people with chronic malnutrition, those with alcohol dependency, and anyone with health conditions that limit absorption of dietary vitamins.
Adults and children who eat a balanced diet that include the foods listed below will obtain enough vitamin K, and do not need supplementation. People who may benefit from supplemental vitamin K are babies (who usually get a shot of vitamin K at birth) and those with digestive diseases.

Vitamin K is abundant in green tea, leafy greens, such as Swiss chard, kale, parsley and spinach, broccoli and cauliflower, Brussels sprouts, liver, soybean oil and wheat bran. Fermented dairy, including yogurt, cheeses, and fermented soy including miso and natto, provide K2, which is especially helpful in increasing bone density and reducing the risk of fractures. Those with osteoporosis or osteopenia should consider supplementing 50 to 100 mcg (micrograms) of K2, and eat foods rich in vitamin K.

High doses may cause numbness or tingling in the extremities.

Please contact me if you have any questions about these remedies or would like more details on the process of making and finding the ingredients. I will be happy to answer any questions you may have.
Contact Me